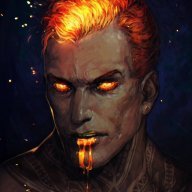 It was a quiet night in Ragash. Gerra stood on a balcony of the Alabyad Palace overlooking the city. Lantern, candle, and torchlights flickered in homes and late night lounges, like a thousand tiny, twinkling fireflies. Beyond them lay the vast, black expanse of the desert. And beyond that? The even broader savannah, which stretched on for leagues upon leagues. Home to countless tribes.

Beside him, Gerra heard a rustling. He turned and saw Uvogin standing silently, a protector against whatever the night might bring. How did a man go from being a simple mercenary to the captain of an imperial bodyguard? Greed? Ambition? Gerra has seen neither in Uvogin, despite his background. He had always been a calm, implacable bulwark against which the Empire’s enemies broke. Faithful. Loyal. But... why?

A cool breeze rustled Gerra’s black tunic and he looked up to the heavens, where the stars shone in their millions.

“Why do you serve me, Uvogin?” he said, deep voice no more than a whisper in the dark. “You could’ve had your riches and left. But you stayed.”
Reactions: Ashuanar and Uvogin 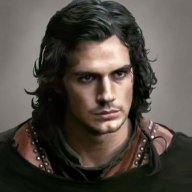 Even in the eyes of a man like Uvogin, who oft did not search for beauty in the world, the lit nightscape of Ragash was undeniably spectacular. The same lights that lit the streets below illuminated the great domes of the Alabyad Palace, creating a beacon for weary travelers amidst an ocean of sand.

The night was one of many, a routine that Uvogin followed with unwavering discipline. That routine, however, was broken as Gerra asked a question of the captain. It was a rare thing for Gerra to find time for leisure, and even rarer for him to speak so personally to Uvogin. The nature of many of their talks have been only professional.

A silence hung between the Emperor and his guard before a dulcet monotone hummed behind the fearsome mask.

"Have you ever had a home?" Uvogin did not give Gerra a chance to do more than think about his answer, "You must have. Perhaps I had a home when I was born, but my first memories were of stone walls and iron cages- not of a home. I have lived in many places, known many people, but I have never had any place to which I could return."

He stepped further out onto the balcony and rested his hand on the parapet and idly gazed over the city. The expression he wore under the mask would be a mystery to the half-giant.

"It seems that an inadvertent consequence of my service to you, Gerra, was the founding of a place I could call a home."
Reactions: Ashuanar and Gerra

The half-giant was silent for a moment, looking out across the the desert in the soft light of the moons and stars.

"My understanding of home is different than yours. It was... not a pleasant place. A prison."

His grip grew tight upon the railing, then relaxed.

"But I am glad you find comfort in it. I am not a perfect man, Uvogin Hill. You know this more than most, ever at my side. There are decisions I have made... and that I must make still. Hard ones. Ones I do not relish. People will die because of them. Innocents - women.... children... but if I can create a land of peace and prosperity, will it not be worth it? Sometimes I wonder."

He turned away from the desert landscape and leaned against the railing, facing the palace's looming domes. Red-gold eyes turned to regard Uvogin.

"It is rare to find someone like you. Any other man in your position would be plotting ways to ascend to greater heights, or planning my demise. How can I repay such loyalty? I would heap gold and jewels upon you, but it would cheapen it. I can only give you my honest thanks. To stand where I stand is easier when I know I have a true friend at my back."
Reactions: Ashuanar and Uvogin

Uvogin stepped onto the balcony next to Gerra and removed his helmet, placing it on the railing. The man let out a deep, contemplative sigh and stoically gazed out over the city.

"All I see is stone. And dirt." He commented on Ragash. "I would presume that your vision is grander, you can see beyond the surface of whatever it is you set your eyes on. To say that a man like me is rare only devalues yourself, Gerra."

The captain turned so he could look up into the Emperor's eyes.

"I have served many men that claim to hold an ambition, though more often than not, those same men are fickle and only half-heartedly pursue whatever it is they desire. Eventually, they give up. You-" he paused a moment to study the half-giant, "You... despite the weight of your decisions, do not falter."

For the first time that night, Uvogin's posture slouched. Resting his elbows on the railing, he leaned over the balcony. The corners of his mouth drew up in a fleeting, wry smile. He turned his head and side-eyed the Emperor.

"If you wish to reward my loyalty, Emperor, then I only ask that you stay true to your ambition."
Reactions: Ashuanar

Gerra rested a hand on Uvogin’s shoulder and stared deeply into his eyes. The emperor’s gaze was intense, like a smoldering furnace, but he knew Uvogin wouldn’t turn away.

“As long as I have you, I consider myself rich. Of all my advisors, generals, and sorcerers... you alone I trust. I hope you know that, Captain.”
Reactions: Uvogin

The fleeting image of the slightest smile pulled at the corners of Uvogin's mouth. He tightly gripped the half-giant's forearm, his fingers barely able to halfway wrap themselves around Gerra's flesh.

"I will live up to the trust," and pressure, "that you place on me."
Reactions: Gerra

Gerra arrived in the madrassa of war in the earlier hours of the pre-dawn morning, unaccompanied. He waited on a training mat in one section of the madrassa and eyed the weapon racks that lined the walls. They held all manner from staves to glaives and many exotic weapons that Gerra had never seen before.

He wondered if Uvogin was equally skilled in all of them.
Reactions: Uvogin

Uvogin, flanked by Mehmed, arrived in the room some time after. They spoke about the day’s schedule, but fell silent upon witnessing the half-giant’s silhouette at the center of the mat. Uvogin had been rolling up the sleeves of his drab tunic as they’d walked in.

The captain whispered to his lieutenant, sending him off, and cautiously walked to the edge of the mat.

The emperor's eyes slid sideways to regard the Captain of his Immortals.

Obsidian features revealed nothing. Gerra could have been carved from granite.

"I wish to spar."
Reactions: Uvogin

Uvogin's expression hardened, his lips pressing into a thin line as Gerra stood there, his statuesque frame threatening to fill the whole room.

"Very well," his voice trailed. Uvogin averted his gaze towards the many racks along the wall.

"Have you a preference for weapons?"
Reactions: Gerra

The emperor stood, shedding his tunic to expose a torso the size of a tree trunk, shredded with muscle and scars, and inked black above the collarbone with tattooed runes.

His smoldering gaze did not leave his captain’s form. He awaited the attack, planting one foot slightly back and raising his hands to hip level, palms up, as if ready to receive a gift from the dark haired soldier.
Last edited: Jun 24, 2020
Reactions: Uvogin

Uvogin waited for his friend to give him a serious answer, and frowned as Gerra instead took his stance. The captain twisted the ring from his left hand and bent down to place it by the edge of the training mat, and unlaced his boots, leaving them next to the ring. Shedding his doubts and hesitation like Gerra did his luxurious threads, Uvogin stepped onto the mat.

He deeply exhaled, let his hands loosely fall by his sides, and relaxed his shoulders. Uvogin slowly circled Gerra to the outside of his lead leg, fluidly bouncing off his toes. He watched. Waited for the Emperor's patience to wane.
Reactions: Kailyn, Gerra and Nymeasha

“Well?” Gerra watched Uvogin prowl the mat like a cat wondering if it could make of him its prey.

How many people ever felt the urge to punch Gerra in his mouth? Too many to count is what Uvogin thought. Not many could easily reach him anyways- even the captain would struggle if he had ever wanted to. Even so, he obliged his friend, the Emperor.

His legs carried him in a pendulum-like movement, and his lead leg lashed out at Gerra’s thigh, just above the knee.
Reactions: Nymeasha and Gerra

Hardened calf bone slammed into the meat of the half-giant's thigh with a fleshy slap that resounded in the room. Gerra let out a grunt of pain and his leg seemed to wobble, knee pushing inward. He did not strike back and seemed unsteady, like a great tree that had lost one of its anchoring roots.
Reactions: Nymeasha

As soon as his lead foot touched the mat, the captain pivoted on it, and his rear leg swiftly lashed out to kick above the knee, though this time on the inside of Gerra's thigh.
Reactions: Gerra

The foot struck again, quick as lightning, swift as a swooping hawk with wings spread wide and talons angled for the kill. Gerra hissed between clinched teeth as the blow bowed out his leg and sent him stumbling to one knee, hand reaching out to steady himself on the floor.

He looked up with dead eyes into the face of his Captain and saw only an implacable determination there. Gerra did not strike back. Did not even make an attempt. He only locked gazes with Uvogin and awaited the next blow from where he kneeled.

Ready to receive the pain.

Ready to receive the anger.

Ready to receive the punishment for his sins.
Reactions: Nymeasha and Uvogin

Uvogin felt nothing for the brief, fleeting moment that their gazes met. And then, suddenly, he felt everything. Confusion. Sadness.

The Captain, his demeanor characteristically stoic, took a single, weighty step forward. A dull thud resounded in the room as his foot stomped down on the mat. Uvogin's muscles tensed as his body violently twisted and leg cocked back before swinging up towards the Emperor's stomach. Would his foot shatter against Gerra's imposing physique; his bones crumble to dust against the mountain of a man?

He had discarded all forms of technique and discipline; the kick was nothing more than a silent, vicious outburst of emotion.