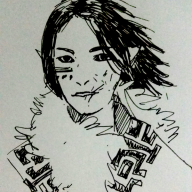 The land between molten earth and ice, south of Eretejva and north of Sheketh. It was as sublime as it was imposing: Mountains would span high above the first layer of the lacing clouds, while bountiful terrace fields would coat the hills. Grand forests that lay in the valleys and mountainsides, their raw beauty growing after each heavy rain shower.
Volcano ridges that span from the Sheketh would run across the eastern coastline, many of whom lay dormant, only showing their eminent presence and snow-tipped beauty. But perhaps the best of this land were the flower-laden grasslands and the open expanses in the south and the myriad of mountain valleys.

Serene were the villages that dotted these valleys and mountain sides, plenty of them just out of a single prosperous clan, while others were many or none at all. This was but a small region on this massive island, a hotspot for two particular kinds of men, but the carriers of this story were two kinds of people; the yokai and the cerulean elves.

From farming villages, grander towns rose. Around prosperous cerulean elven clans, smaller ones followed suit. Yet the yokai, who harboured a magic developed since the dawn of man were forever split. The cerulean mountain fortresses only grew larger and larger, with garrisons overflowing with soldiers, hegemons were slowly established.
Yet the yokai were independent throughout.

But as these grand clans turned to semi-noble houses of their own, and as their influence spread, it was inevitable that they'll start to step on each other's toes.
(It is worth noting that the great houses were more akin in power and land ownership to western lesser barons rather than higher nobles.)
With desired territories overlapping, the true war began.

Underneath the white-walled and black-wooded palace, among the secluded peach orchard. Lord of the grand Kara house and his warlord were walking amid the pink blossoms.

»The fourth division was sent to the Valley of the Lasting Mist. They are due to intercept the enemy forces tomorrow.«
The Kara Lord would nod his head as he listened to his military leader. Yet, his face only grew more solemn.
»With the victories, we amassed. Our forces have only been whittling away,« he finally spoke. »The war is still young, but I can already foresee my house executed and my land annexed.«
»I assure you, Lord Kara, our soldiers are the finest among the land.«
The lord would slowly wander to the side, approaching the fortress walls, his gaze was set a the trailing scorch in the distance. Villages were still being razed. What a blemish on this once so beautiful land. »We should request the aid of the sellsword clans.«
»Masters of the martial art of the seven subtle body energies? We dare not ire them. For their involvement could lead to them overtaking us in the end.«
You very well know that our soldiers are no match to their magic.
»But what an advantage we would have. Imagine. Kara Ito, Emperor of the land of molten earth and ice.«

With the aid of the sellswords. Sky Imperator Fortress has fallen to the Rana House. Corpses of nobles were piled at the centre yard and burned, even the drifting petals would catch ablaze.

House Kara was not the only one to catch up on allying themselves with the myriad of martial Yokai clans that turned the battles into grander, greater battlefields. The results were devestating, but wars ended quickly in decisive battles, assassinations and covert operations.

Lord Rana smiled at the sight of his newly acquired fortress. »My province is growing, and I see times of peace for our people.«
»But what of the yokai. Their allegiance to us is only temporary.« Spoke the Rana warlord.
»Soon there will be peace among the forming nations, but I see contempt growing among the different clans. They now rely too much on our gold and our need for them is lessening. Spark the tinder in a dry forest and the fire will spread on its own.«
Last edited: Mar 16, 2019

Tranquility was in the land that belonged to the established lords of the realm. Their grand mountain fortresses had eyes; Gazing vigilantly over the valleys and villages that lay in their figurative shadow.
Farmers could work their fields without worry for ambush and plunder. Traders could carry their goods far beyond their homeland borders. And the higher-born settled peace among themselves. Even if temporary, it was a time of prosperous growth and no-fear.


But for the unaligned clans, masters of the seven subtle ways, which proved decisive victories in the previous wars...
It was a time where only every fourth child would reach adulthood. And even then, survival further than that was often not guaranteed. This was a life without childhood, with many clans wiped off the earth, down to the youngest member.

Nobody could recall what first caused the animosity among the clans.
Land, employers, to thin competition. Or perhaps it all was nudged by the lords who feared the clans would rise against them. It was better to have them wiped off the land than risk loosing all this power.
You must log in or register to reply here.
Share:
Facebook Twitter Reddit Pinterest Tumblr WhatsApp Email Share Link
Top Bottom