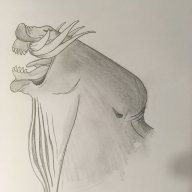 Pretty Boy had thought the strange woman had been his friend. They’d had fun hunting together, and then she had tried to murder women and children in front of him. Pretty wasn’t imperfect from a moral standpoint; he’d eat people if they annoyed or attacked him. He’d been swayed to attack fairly innocent people before.

The burn on his back hurt, but he hadn’t sought any medicine for it other than washing it in a river, and it was beginning to show. The flesh from the large burn across his back had crusted over and scabbed. It was hot and swollen, but he couldn’t twist around to clean it without pain spiraling up his back.

The devourer had found enough gold to purchase a bottle of whiskey. Alliria was fairly open to people of other races, and no one had blinked at a devourer purchasing liquor. He laid in a park on his belly, lips around the bottle and lifting his head every now and then to send a swallow down his throat. Every time he spat the bottle back into his waiting paws and stuck his tongue out. This was so disgusting...but it numbed the pain in his back.

He laid his head on the grass and looked out at the city. He was lonely, and hurting, and didn’t know how to fix either problem. Surely someone needed him? Somewhere? 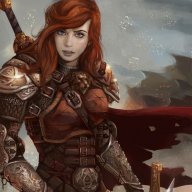 Maeanna leans against the trunk of a small tree, arms crossed over her chest with one foot kicked up and crossed over the other, toes resting on the ground. She had seen the strange creature when it was leaving the building a few minutes ago and was dumbfounded. Had she imagined it? She knew she had a propensity for imagining monsters when there were none - a bad habit from her childhood and early teen years - but this seemed too odd to be something she would have thought up. So, out of curiosity, she followed after it a moment or two after it had left with the bottle of alcohol to see where it would lead her.

As it laid down in the park and began to drink, she stopped to observe it for a while, wondering if it was waiting for something or someone. It wasn't until several minutes had passed before she noticed the discolored and oddly textured spot on its back.

Her legs moved before she could consciously tell herself to move, and she began to head toward the creature. Since it had bought the alcohol, she assumed that it was intelligent enough and hoped that it understood the common tongue. As she approaches the being on its right side, she crouches down a little to make herself seem smaller and holds her hands out to show she was unarmed and not here to hurt it. "Hello," she says with a small smile, pulling back the hood of the cloak she wore to try and make herself seem more approachable. "Would you like some help?" She asks, using an open-palmed hand to gesture to the spot on its back.

Pretty had finished the bottle off and it hadn’t quite helped. He lifted his head a bit when he noticed someone approaching him. A woman with her head covered, who crouched and reached out to him. She gestured to his back, and he leaned his head back to look at it. It really didn’t look good did it? It hurt, and ached. He whined softly and lifted a paw, extending one of his formidable claws.

He wrote sadly in the soil. No healer here would see him. He either couldn’t fit in the building or the healer wouldn’t read his demands for help. Perhaps she could help him.

Help? He wrote, looking up at her.

Maeanna's eyes were wide as the creature looked at her but her smile only widens. It was one of compassion and understanding and realization of the fact that this being didn't intend to hurt her. She watches him lift his paw and use a large, dangerous looking claw to draw in the dirt, and then slowly crawls closer to get a better look at what he was doing. "Oh!" She exclaims, her tone both surprised that he could write and saddened that he was in pain.

She lifts a hand to carefully rest it on his neck and rubs it gently before reading the second thing he wrote and immediately nodding. "Of course! Of course. Just be still and breathe," she tells him, shifting as she does to her knees so she was facing his side. She lifts her hands and hovers them above his wound, close enough that he would be able to sense their closeness but far enough away that she wasn't touching the wound. As she mulls her options over, she focuses on breathing. In through her nose and out through her mouth.

She could do a rapid healing spell that would probably hurt more than was necessary, a slower healing spell that would gradually heal and close the wound, but the effect might put one or both of them to sleep, or she could use a bit of her nature magic, which would be mildly uncomfortable for him but would result in her falling unconscious for a few hours. She nibbles on her bottom lip as she tries to decide, hands still and steady, and then nods once to herself as she chooses.

She clears her throat and closes her eyes before starting to quietly recite an incantation, her body slowly tensing up as she felt the energy building up in her core. Then, after about a minute, her eyes fly open and glow a bright green as the last word of the spell falls from her lips. A flash of green appears where her hands were over his back, and then it was done. He would feel a pleasant warmth on his back, and then nothing.

She sits back heavily and exhales, turning her gaze to meet his and saying, "It'll be okay," before slumping to the side and falling unconscious. He would be able to watch as his skin knitted back together, and the scabs covering his wound would flake off and disappear, leaving his skin the way it was before he had received the wound.

Pretty Boy watched as she held her hands over his back. She spoke in a language he didn’t quite understand, and her eyes flashed green. He felt a little bit of warmth on his back...then the pain melted away. She slumped back, then over into the grass. He looked at the wounds. They were slowly closing, and itching. He stood up and shook himself, then rolled in the grass to rub away the last of the itchy scabs.

She’d healed him! He gave himself a final shake, to rid himself of any grass, and padded over to her. How exactly to thank her? He nudged her a bit with his nose, and lipped at her hair. Well...a human named Reginald had once told him humans didn’t like being in the pouch. But she couldn’t hold on to ride him, and people gave him weird looks if he carried her in his jaws. Maybe if he was quick?

He lifted his tongue to the roof of his mouth and opened up a flap tucked away under his tongue. He had to be careful about this. Devourer pups had thick skin to make sure any snags on a father or mother’s teeth were negligible. Humans didn’t have any such protection. He gently took her head in his mouth, and pushed her into the pouch. The marsupium was dry, warm, and lined with soft fur similar to what was along his belly and the insides of his paws.

Mouth held slightly agape so she wouldn’t choke, he trotted away to his accommodations.

The stable hadn’t been happy about him staying there, but they’d cleared a stall for him after he offered them silver. It was clean, with fresh straw. The horses didn’t like him, but he could understand why. Most prey animals didnt.

Pretty settled down on his belly and tucked his paws up, settling his elongated head back on his shoulders. His mouth was still open, and if she pushed at the top she could easily get out if she wanted to.

Maeanna would be unconscious for about a half an hour as her body regenerated the energy she had expended in order to fully heal the creature's wound. She would begin to shift slightly as she regained consciousness and sighs softly as she feels the rather cozy accommodations she was currently residing in.

Mae actually nuzzles into the softness her cheek was pressed against and tries to stretch out her legs and arms before stopping and opening her eyes to look around. "What the..." She begins to sit up and push her way out of... wherever she was... and accidentally stumbles when she stands and tumbles forward.

She lands on her hands and feels a painful twinge in her right wrist, earning a sharp inhale as she pulls herself free and allows herself to just lay on the ground, still rather weak. She lifts her head a little and peers at the creature as she cradled her wrist in her good hand, slowly rubbing it as she winced.

It slowly registers in her mind that she had been inside of the being's mouth, and she actually smiles and giggles a little as she lets her head fall back to rest on some straw. "What are you?" She asks of him, acting almost drunk as she recuperates.

Pretty was dozing quietly when he felt the insistent push. He tilted his chin a bit to help her out, and rolled his jaw. Well at least she hadn’t kicked him in the throat like the last few people he’d carried. Humans really didn’t like tight spaces. He yawned and looked at her, snuggled down in the straw. She laid on the ground, cradling her wrist, and Pretty licked it for her.

He half expected to be shouted at. Instead she giggled and asked him what he was. He pushed away the straw with a paw and extended a claw. Pretty Boy. You? He asked. Thank for healings.