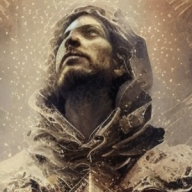 The Merchant Lords of House Vexion were esteemed within the City of Alliria and their wealth spoke to such a thing. Within the city, it was a common thing to see the large houses and the manors that lined the streets of the Inner City. For centuries, the merchants that took up residence in these splendid homes came and went. Some of them lasted for thousands of years and others had their day and faded into obscurity along with all that they created for themselves in that grand old city. Vexion's Court, stood out among even the finest manors in the city. The dwelling from the outside looked something like a cathedral that had it's place not too far away from the Allirian Keep. The large tower it sported had it's own place on the skyline of Alliria, something one might be able to see when riding into the city from afar and yet it was one spire in a place of many. To see it face to face was to lay eyes upon an entity in itself. The walls were built and shaped from white stones. The doors were reinforced and heavy. Two men from the Allirian Guard stood watch over the great entrance and there were many who were approaching the doors and showing their invitations to the gathering within.

Peers both friend and foe were happy to make their presence known in private events such as these. House Vexion was known for the myths around their founding as well as other things that made them relevant to this date... Quintus's ancestors recognized a simple truth that came with their mythos. There would always be a need to spill blood. Alliria was known for the exportation of armaments to places all across the world. Allirians spilled blood not only in the Reach, but helped others do so in places far away as well. Being one of the first Houses to contribute to such a thing had been a point of pride for Quintus's father and his father before him. At their core they were greedy and Quintus was hardly afraid to tell anyone who wanted to know the truth of things. All the same, this palace, this place was his home and it was here that he conducted his family's long standing business.

Black velvet. Quintus was dressed in black velvet. The red ruby on the signet ring he wore shined brightly in the light of the torches and candles that were lit all about the manor. His long black hair was allowed to flow down his shoulders and back freely. He had no great love of drinking. The private party had begun an hour ago and he still carried the same glass of wine. Harps played and singers that sounded as enticing as mermaids on the high seas filled the high halls with their voices, singing even over the chatter of the various merchants of Alliria and nobles from beyond. Quintus watched them all from his balcony and silently wished he could send them all away. The voices of the helm had been silent as of late as they often were when he hadn't had to touch the Star-Made Armor for some time. It was in those moments that he liked to be alone with thoughts that were his own. And yet, different duties called to him.

His brown, swarthy features had been rather sullen as he counted all the heads in the foyer, though there was one that caught his attention the moment he walked through the door. He was more than happy to see someone who wasn't like the other corrupt and morally degenerate people that congregated in his home. Quintus Vexion, ever graceful made his way down the stairs and through the crowd as he excused himself.

"Emiliano!" he approached, offering his old friend a hand to shake with a warm smile. "Good friend, welcome to Vexion Court! I'm happy you could make it."​
Reactions: Emiliano 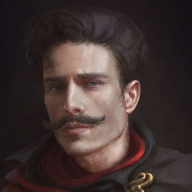 Red. A color that marked those blessed by the gods. The color of blood. Emiliano always laughed about the idea. That those who would pit the lower castes against each other would spin such a web. Red. The color that spilt across the sands of the fighting pits. The color that sprayed across his knuckles. Spattered across his naked chest. Ran full in his eyes when flesh tore above his brow and his own ichor poured into the whites of his gaze.

Red was the color he chose to wear on this day. For no other reason than to remind himself of the price he had paid to make it so far in this world. And because he looked damn good in it. A taller and more gaunt man opened the door of his carriage, Emiliano bowed his head to the taller man.

"Gracias, Federico," he eased out of the carriage, and Federico kept his head low as he walked by him, following after once Emiliano had passed him by.

The former champion strolled up to the doors of the estate, where a purse lipped door man stood guard. "Master Emiliano," the man bowed to him and opened the door.

Music swelled from inside, the sound of many voices mingling and mixing. Good humor, and good cheer. "Thank you, Balt, always so welcoming," he teased with an easy smile. Emiliano strode in, a black half cape over his shoulder stirring some with the swagger of his stride. There were pretty faces to wink at, and raised glasses to nod to. A familiar voice called out. "Quintus!" he replied, arms out, he wasted no time in embracing the younger man. Even squeezing him. Some of the nearby nobles laughed some, but Emiliano went on, with heavy handed pats on the master of the home's back, and a bright grin on his face.

"You know, to tell it true, I'd grown a little tired of all the gatherings and galas and feasts as of late, but" he shook the man a bit, as if he were greeting an old freind from the streets, a finger waving at him. "When I read your missive, well, how could I not?" A pair of smiling young things strolled by, and Emiliano smiled at them in return with a knowing tilt of the head. They trailed off, and he let Quintus go. "You do surround yourself with quite the crowd, after all," he grabbed up a drink from a passing server, and a second in quick succession. He offered one to Quintus, and was already drinking from the other.

After the long sip of floral bubbly, he looked to Quintus. "Well, what is new since last we met, my friend?"
Reactions: Quintus Vexion

Happiness. Genuine joy to see a good man doing his part in to make the world a better place even though it gave him no reason to. Quintus was quite aware of the advantages that he was afforded from birth. He came from a wealthy family with a history dating back to times that most didn't care to remember. His privileges always simply were and there was never any need to worry about danger he didn't put himself into. Had Quintus chosen to live a boring life, there might have been no struggle. Just another rich merchant in the greatest city of merchants to sit idle and drunk from the fruits of his ancestors. One might say Quintus was special because he chose to be. He used all that was offered to him and led a life of adventure. Protecting the weak and hearing the voice of the gods because he was ordained by every law in the cosmos to be capable of doing so. Knowing Emiliano the Anvil's history as a pugilist that made something of himself was inspiring. Even more so that he made something of himself and chose to be an upright man despite all the reasons why he shouldn't was even more admirable. Quintus was more than certain that out of all the blessings to come to him, a friend like Emiliano was one of the greatest boons that either fate or the gods had bestowed upon him.

Quintus laughed a bit at the mentioning of Emiliano growing weary of the festivities in the city known for it's festivities. There were few things rarer in places like Alliria than an affair put on by the wealthy in order to rub shoulders and scheme with one another. Quintus had found love in other places. Love in the grip of his sword swinging in a far away place. The songs sang by mercenaries on journeys they may never return from. The seat off the coasts of the sands of Amol-Kalit at night. That was to die for...

"To be honest, I wish I could give you an interesting report," he said passively before, much to his chagrin he was forced to down the wine in the goblet in his right hand so that he could place more attention to the one Emiliano gave him in his left. He leaned in a bit for what was to be said next. "Yet another carousing for the snakes of this city so that I might see more clearly who might try to knife in the back tomorrow, hm? Nothing but politics as usual."

Politics that he hated participating in. Everyone in the room there likely imagined themselves a piece on some grand chess board. Each piece moving to find supremacy over all the other moving pieces around them. What few understood was that they were more akin to the pieces of some foreign contraption. Something beyond the understanding of most mortal creatures. The system they created that allowed the poor to starve and for the rich to grow richer. The suffering and insidiousness that it caused seeped into the very earth around this city. Vile spirits clung to it until cleaner ones woke him from his sleep some nights.

He'd seen hell itself whenever they got their way.

"And you, friend? How long has it been since I've last seen the Anvil? Still in the fairest city in the world fighting the good fight I hope."

Quintus gave Emiliano a joking smile as was their way, but Quintus was always prepared to fight right beside him if ever asked. After all, there were few other things worth fighting for in the world outside a good fight.​
Reactions: Emiliano
You must log in or register to reply here.
Share:
Facebook Twitter Reddit Pinterest Tumblr WhatsApp Email Share Link
Top Bottom