Open Chronicles Another Town, Another Tavern. 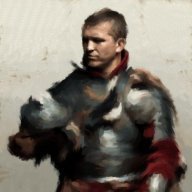 Location: Outside Mothal
Objective: Raise a small fighting force and get out

"Where the hell is Konstantyn? Every time we end up in a bar the fool disappears again." Kasmir angrily plopped down and took a swig of his drink. He looked across the table and made eye contact with Philip. "You know, don't you?"

"You know boss, don't ya? I can't be the only one who noticed Konstantyn checking out the tender's wife." Philip let out a light laugh and the other men at the table began cracking up. The company thought it was hysterical. In the past months they'd made their way across the Blightlands and had yet to arrive into any town where Konstantyn wouldn't take advantage of some young neglected wife and have them run out.

"The damn fool needs to think with his other head for once. He slept with the wife at the last inn and had us all run out of town, and the town before that, the target was the mayors daughter. It shocks me that the man lays with any woman he sees and has yet still has time to be constantly drunk." Kasmir shook his head.

Across the room, there was the explosion of yelling and screaming. The bartender's voice barked into a back room and with that signal, Kasmir and the six other men of his company got up and quickly made their way outside to the horses, slamming the tavern door behind them.

"Come here ya bastard! Get back here!" The muffled screaming was racing towards the door just behind the noise of heavy boots dashing towards the exit. The men in the company, save for Kasmir, erupted into laughter as the bearded Konstantyn knocked through the door, tavern owner right on his tail. Konstantyn stopped and faced the bartender, tightening the drawstring on his pants.

Konstantyn looked the fat, bearded bartender up and down. "Sheesh, are you a sight for sore eyes?" He tightened up into a fighting stance as the bartender lunged at him fist-first. Konstantyn simply dodged by dropping low and then pushing the man back to fall in the mud. As this was happening, the door to the tavern flung open and a fair young lass, no older then 20 and blonde with scarce clothing stepped out and began yelling.

"Stop! Stop, you fools!" Quickly she ran over and caught Konstantyn's fist as he was mid-swing towards the bartender. "You need to leave, now!"

The company began saddling up and the woman reached for the bartender who simply screamed profanities and lifted himself out of the mud. Kasmir looked at Konstantyn and shook his head before motioning for him to mount his horse, which he did. The company and their horses departed, turning towards Mothal. The city was just a night ride away, and they had obviously overstayed their welcome, so with the drama over, and the troops quickly readied, the troops began at eager pace towards the city in hopes to raise some troops for the coming conflict.
You must log in or register to reply here.
Share:
Facebook Twitter Reddit Pinterest Tumblr WhatsApp Email Link
Top Bottom