Fate - First Reply A Court of Dragons and Mist 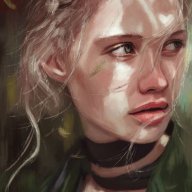 Her lungs burned and her legs ached. Even though it was cool, sweat still slid down her face, plastering blonde wisps of hair to skin. She just had to get to the line. But it was still far. Too far.

For the millionth time she wished she was fae. Then she’d be faster. So much faster. Less...breakable

The mists rose like wraiths from the dark woods she ran through. She didn’t dare look back. Couldn’t afford even that second. There was a chill on her heels and she knew they were that much closer.

Branches snagged at her clothes. Her skin. There was a measure of protection for her in the autumn court but here? Here she would not be protected. 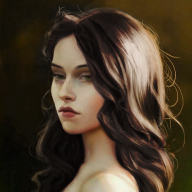 Isiell couldn't resist, at times, loitering near the Winter Court. She hadn't really been banned--she'd left before they could actually do that, but it had been coming--but she was certainly not welcomed. So she just strayed near the border, at times, when she wanted to see how her few friends were faring. And to taunt her parents, to some extent.

But this... she what was the little frail human that Ariel had taken an interest in at that masquerade doing here?

Something was after her, but Isiell didn't know what yet.

She watched quietly for a few more moments, debating if she should intervene, but ultimately decided that it would be a shame if Ariel were to come across this human's corpse in the woods around the Winter Court.

So Isiell stepped into Fraeya's path, and waited for the human to draw closer.
Reactions: Fraeya

She blinked as the one from the autumn ball stepped from the wood. The one that was Ariel's companion. The one that had disappeared into the booth with Prince Lorcan. But this time Fraeya wasn't scared of her because there was something far worse behind. Something that didn't care if you were human, fae, or whatever. Something even more ancient than the fae.

Her breath came in ragged gasps.

'RUN,' she mouthed not slowing as she ran at Isiell.

But it was too late. There was a sudden icy wind and a dark cloud that expanded from behind Fraeya swallowing up the very wood.
Reactions: Isiell

Fraeya didn't slow, continuing to run toward Isiell, and Isiell just barely caught the word that the mortal mouthed.

What could be chasing the girl that made her give warning even to a Duannan?

As soon as Fraeya was within reach, Isiell reached out and grabbed the girl's arm, yanking her into the cover of the woods. The fae threw up a hand. Other than fire, she had an affinity for air, and she blunted force of the cold wind before it hit them with its full-strength. As the dark cloud followed in its wake, Isiell hissed in the mortal's ear.

"Just what have you annoyed this time?"
Reactions: Fraeya

She nearly collapsed as Isiell pulled her down. Oxygen, she needed more oxygen. Heart clamored in her chest like a frantic wren in a cage. The magic wouldn't save them. Not what they were about to endure.

"It's a bogut. It's...too late. Close your damned eyes and cover your ears." They would have to endure it. The boguts were such a dark and ancient force, no, creature. It would beg them to look. To look at it. To use their greatest fears or desires to open their eyes. Just one look at it. But Fraeya knew to look was death. Their only hope was that it would grow bored eventually and pass on.
Reactions: Isiell

"That's always what you mortals do," Isiell sneered as Fraeya continued to catch her breath. "You disturb something and then claim it's dangerous when it responds. Hence, you've annoyed it, but don't want to own up to your actions or their consequences."

The girl was terrified, though, but not of Isiell, and that... annoyed her. Isiell, however, for all her love of chaos, was not about to ignore actual, imminent danger.

She wasn't sure what a bogut was, but if it used sight and sound against you... well, that would be bothersome.

With a flick of her wrist, Isiell created a bubble of air around them, and all sound from the forest faded away, until only their breathing and their heartbeats were audible. Whether it would hold or not, Isiell didn't know. If this bogut had a way to speak directly into their minds and not just with words, this bubble would be useless.

"What, exactly, is a bogut?" Isiell demanded, her eyes narrowing as she watched Fraeya, not daring to move her gaze away. There was not long until it was upon them, and the girl needed to speak quickly.
Reactions: Fraeya

Even with her eyes closed she could feel Isiell’s gaze keyed in on her like some focus and vengeful hornets. She didn’t open her eyes. Not at the accusations about being mortal and how everything was a mortal’s fault.

Not at the sudden quiet around them as she guessed Isiell used her air magic. Some said Fraeya’s gift of music was like magic. Like music or song would help in a situation like this. Pffft. Oh to have REAL magic. A pang of jealously and longing flickered through her fear.

“A creature of darkness who will worm into your head. Use your darkest fears to get you to look at it. It roams quickly so we might MIGHT just have a chance. I meant it when I said to keep your damned eyes closed. No matter what you hear.”

Fraeya pressed her forehead to the ground, curling into a right ball. Bracing herself and not caring if Isiell disapproved of the actions.

The darkness was thickening outside Isiell's bubble of air, but no sound was penetrating it yet. She arched a brow as Fraeya pressed herself to the earth, but followed the girl's instruction and closed her eyes.

"Does it use magic to get into your mind?" she asked. "Or does it speak like a normal creature?"

Quickly, Isiell went over what she'd observed so far--not much--and what Fraeya had said about the bogut. It played tricks on your mind, but that was something Isiell specialized in, though her heart clenched a little at the thought of what her darkest fears might reveal themselves to be. It seemed to have some power over the air, though Isiell should prove a match in that area. There was that cold, though... bone chilling, even for her.

"Is it susceptible to fire?" she asked a few moments later, eyes still closed.
Reactions: Fraeya

"I don't know," she stammered, "I..," but suddenly, any awareness of Isiell was gone. She stood alone in a spring clearing. Bright, green grasses and flowers sprung up from the gently rolling hillside. The smells, everything was so...real. Looking to her left, she saw a small lake and a fae couple happily sitting at the shore, a babe held in one's arms.

Somehow Fraeya knew it was her.

Shadows slithered along the grass toward the unsuspecting couple.

Open your eyes girl. Open them.

You can save them. Open them. For me. For them. Presciousssssss girl. Open your eyes.