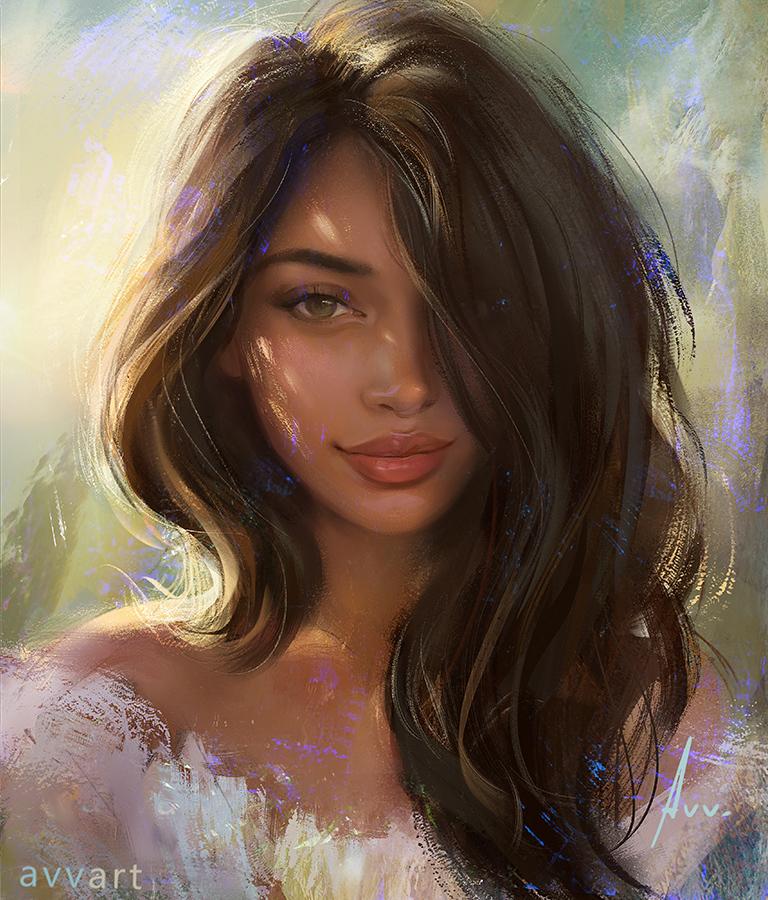 Zana is a natural beauty that turns heads despite her lowly bloodlines. Curvaceous, strong and with eyes at odds with her darker completion she has oft been described as an exotic beauty. She keeps her dark curly brown hair long thought she often braids it when out on duty throwing her features into a sharper and more authoritative look. The difference between the two looks is sometimes so much so that people who see her off duty with her hair loose do not recognise her. Her skin is a light brown that indicates her mixed heritage with cat like hazel eyes which seem to light for such a complexion. In most lights it borders on a blue-ish green but in other lights it can appear more of a soft gold with a green tinge.

Zana isn't tall but the way she carries herself makes her seem a lot taller and despite her curves her muscles are firm from her training in the Dreadlords arts. She had a distinctive beauty mark under her right eye.

Foreseer: Zana's most dangerous and tight lipped secret is her ability to see the future. These visions are not clear nor are they set in stone for little actions can change what she sees. In its basic form these visions come to her whether she wants them to or not and anything can set them off. It might be the touch of a person, an object out of the corner of her eye, it could even simply just fall upon her. After torturous training at the academy she has discovered examining something for a long period of time such as data, or an image, can bring on a vision, however it could take seconds or it could take days. Whilst her skills are improving and most visions are now like watching a disjointed play, they can at times just be snatches and blurry. Again through her training she had learnt to 'nudge' the vision to what she wants to focus on. For example nudging a vision of a meeting to specifically focus on the words on a document or the time on a clock. Whilst this is an incredibly useful gift that helps House Luana it comes at a physical cost to Zana. It is incredibly painful to bear a vision and as they get stronger, more detailed and reliable the pain increases. Sometimes it can get to the point they trigger a seizure. Current advice is to simply practise more in order to get used to the pain or overcome it.

When she is in the middle of a vision her eyes glaze, if it is only a small one, or go pure white if they are violent, strong and drawn out.

Telekinesis: Zana's public main ability is her Telekinesis gifts, enabling her to control objects in the physical plain. Her training in this is progressing nicely but there are limitations to the amount of things she can currently keep in the air or control at once. Whilst this is her second gift it seems to increase in power the more her foresight does. As she tries to keep a low profile she tends to underplay her skill in this area.

Energy manipulation: Hard won from a horrific soul mesh with another Dreadlord, Zana can control raw energy. At the present she is only able to use this in a defensive manner to conjure protective shields. The flip side is the echoes of the mans soul whom she consumed haunts her, and this becomes stronger when she draws on his gift.

Dreadlord training: Under pinning her two most active gifts is the further Dreadlord training she went through at the academy teaching her a wide range of basic magics and honed skills in the arts of weaponry. Zana's main weapons of choice are swords and a large two handed axe, though she has great skill with a bow and arrow and also loves to use her trident when showing off.

Zana is a very quiet person who prefer to watch rather than speak, she also values her privacy immensely. She radiates a calm confidence and gives a certain air of disdain when people speak to her, especially if she doesn't know them. She has an incredibly quick mind that she uses to her advantage and favours spending time on tactics and quiet manoeuvres. She is fiercely loyal to the city of Vel Anir and sees her House as having the cities best interests at heart compared to the other houses, currently. Zana has a dark sense of humour and a wicked sense of sarcasm, but due to her quiet and blunt nature at times those with a less quick mind will take what she says as fact. She is very careful to keep her face blank in most circumstances. Due to her gifts and history she has an iron control on her emotions.

When she does loosen up it is usually with other Dreadlords in her own ranks or age. She had an incredibly high tolerance for alcohol and loves nothing more than a good drink. She also has a secret love of 'uncouth' or 'common' dancing and 'music - it's usually the only time she cracks a smile.

Zana was born to nobodies in the underbelly of the city. Her mother was a maid to a lesser noble and her father toiled on the docks. Despite their poor standing the family were a happy one until Zara's powers became to come to the fore. Her first vision was about the death of her father. At first she thought it was a bad dream and one she told her mother in tears the next morning, who assured her no such thing would happen. A week later there was a knock at the door and some of her fathers colleagues reported the accident word for word how Zana had told her. Her mother glanced at her daughter who had heard the whole thing and went to console her when her TK kicked in. With an ear splitting scream of grief and an explosion of power the small child sent every object in their small dwelling rocketing to the ceiling and then shooting away from her in every direction.

The Dreadlords arrived for her soon after.

As she underwent her training the visions began to grow more painful and more frequent but she kept it tight lipped. It helped that each of her visions was accompanied by another TK outburst usually triggered by the pain of the vision. Unsurprising that when it came to her "specialised" training it started with testing her to the limits of these gifts. During one such experiment a vision, which had previously only come to her at night or in the early hours of the morning, seized her body. It happened in front of one of the Luana aligned tutors.

In fact, all of her tutors seemed to be primarily advocates of Luana. The house with spies in every avenue of life were the only ones to overhear Zana's hysterical mother tell a friend in confidence about her daughter predicted her husbands death. The next day the other woman was dead and so was Zana's mother: nobody else would know this child's gift. Zana was relieved that someone finally knew of her gift and could help her gain some resemblance of control over it. What proceeded in the following years was agony, but she still stands by the fact it was needed to this day. They would induce her visions over and over until they became clearer, more pristine and accurate. She would spend weeks locked in squalid and torturous conditions to pinpoint what exactly triggered her powers and when.

Alongside this training came that of her TK, also done under gruelling circumstances to keep up appearances that that was in fact her main and sole gift. In a way she went through the trails twice side by side.

Based on her TK and other gifts Zana is a Third Level Dreadlord, though if people were to know of her foresight it would probably be bumped up to the higher end of the Second Level. Considering all her tutors were House Luana and her poor background it seemed unsurprising that she swore her allegiance to them and most others lost interest in her after that: after all she's only a TK and they're as common as the muck she came from.

This page has been seen 507 times.